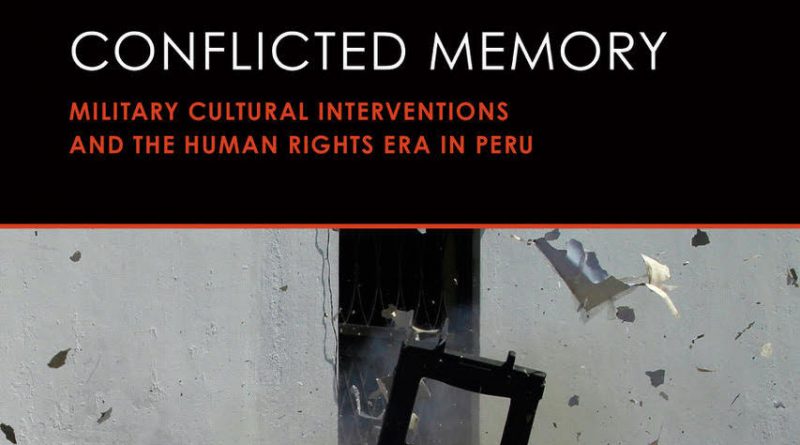 “Visual Footnotes: Counter Memories and Art from a Fractured Past in Post-Conflict Peru” was an exhibition and book launch curated by Cynthia Milton, in collaboration with Lex Milton and María Juliana Angarita as part of the Beyond Museum Walls FRQ-SC Grant. 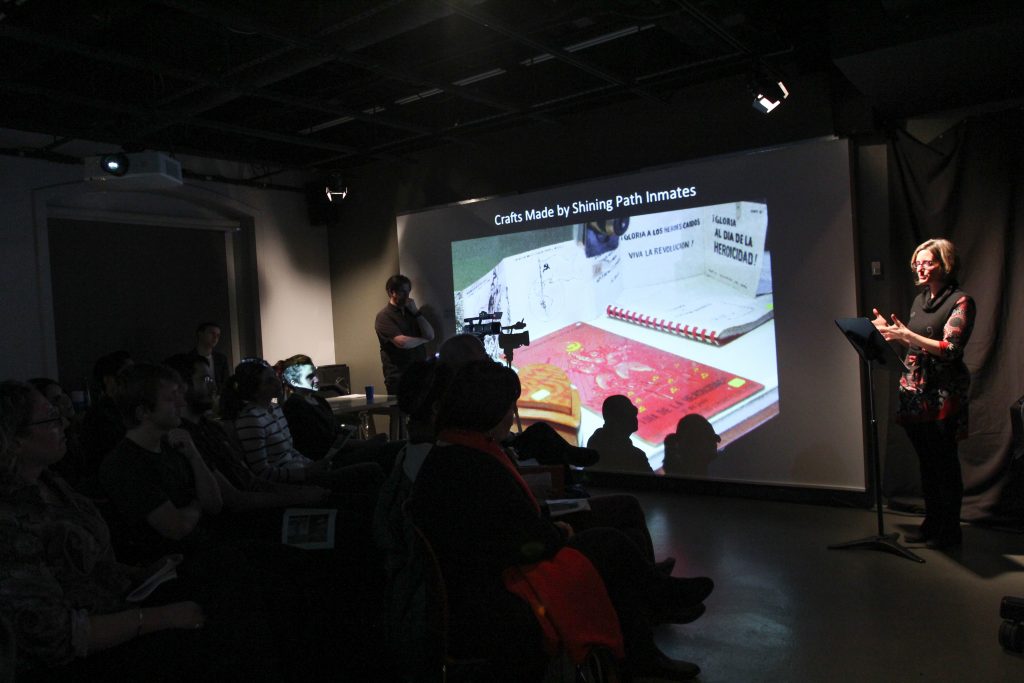 On March 16th, the Curating and Public Scholarship Lab (CaPSL) hosted a launch of Cynthia Milton’s latest book, titled Conflicted Memory: Military Cultural Interventions and the Human Rights Era in Peru. The volume is the second in a series dedicated to the memorialization of the Peruvian internal armed conflict based on the research that Milton has carried out since 2003, when a Truth and Reconciliation Commission was established.[1]

In 2014 Milton, then Canada Research Chair in Latin American History, published Art from a Fractured Past: Memory and Truth-Telling in Post-Shining Path Peru, an analysis of the civic happenings, cultural interventions, and memorial practices developed by activists and survivors’ organizations in response to human rights violations committed during the conflict. In her latest work, Milton turns her attention to the rising phenomenon of military cultural interventions in Peru, an understudied subject in the ever-growing field of memory in Latin America.

Conflicted Memory explores how the Peruvian military interprets and commemorates the conflict while participating in Peru’s contemporary battles for memory. Milton recalls that when she was studying the memorial practices of human rights’ and victims’ organizations, she kept noticing the emergence of commemorative efforts by the Armed Forces. At first, she says, she did not think much about them. However, over time, these cultural interventions —testimonies, novels, research-based accounts, “truth reports,” films, museums, and censorship of negative depictions of the Armed Forces— accumulated. This lead Milton to realize that Peru’s military was in fact responding through culture and memorialization as a means of countering activists’ memories in the public sphere.

Milton’s critical approach exposes the complexities of producing research based on military memories. As Shelley Ruth Butler, from McGill’s Institute for the Study of Canada, pointed out during the discussion of the book, Conflicted Memory allows us to reflect on the ethical knots that emerge when studying the memories of perpetrators, or at least controversial actors, in violent events, without seeking to justify their wrongdoings or providing them with a platform. 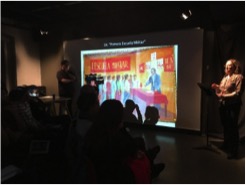 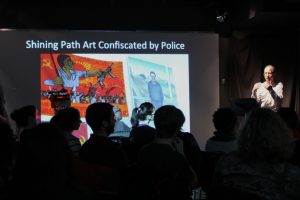 During the launch, Milton invited the participants to dive into the universe of what she calls the visual footnotes of her research on the Peruvian case. The specially conceived exhibit titled “Visual Footnotes: Counter Memories and Art from a Fractured Past in Post-Conflict Peru” displayed multiple sources and items collected by the author over her 16 years of research. The corpus of primary sources on display embodied several of the footnotes in Milton’s publications. Through the exhibit, she shared a diverse set of visual and tangible sources, including newspaper clippings, pamphlets, posters, local art, publications, music albums and recordings, movies and videos, alongside visual evidence of ephemeral sources – such as artistic performances, public acts, commemorations, or even exhibits. 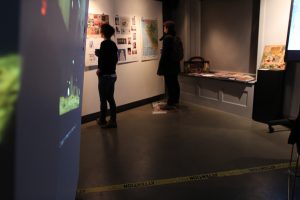 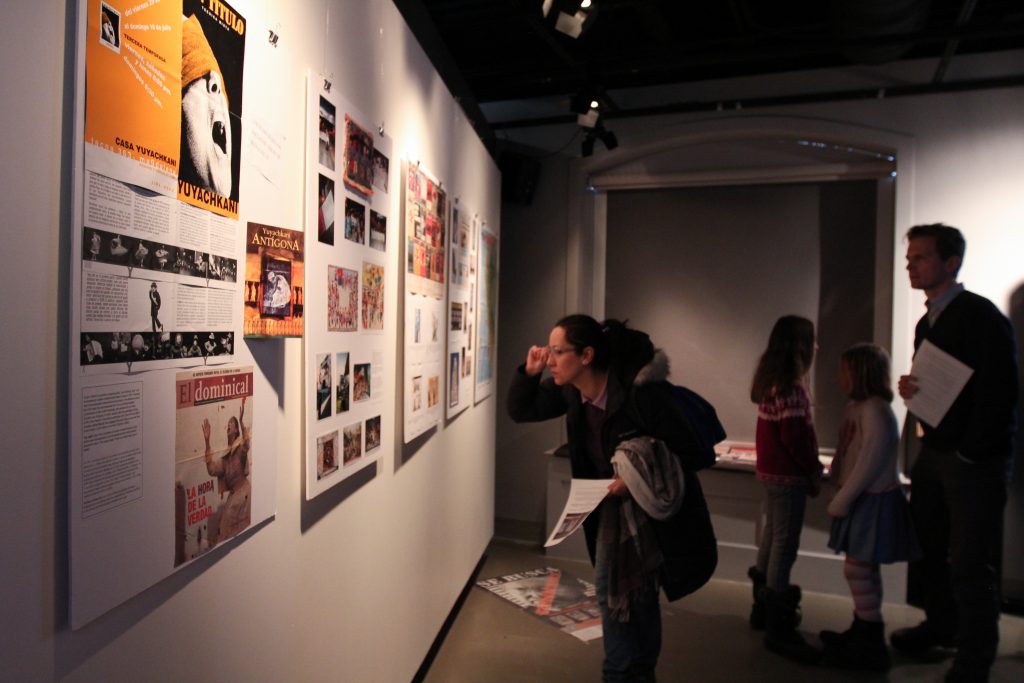 “Visual Footnotes” contextualized and enriched the presentation of Milton’s book, providing a space to not only explore the recent chapters of Peru’s conflict but also the evolution of Milton’s research and intellectual journey. It consisted of three sections, beginning with Section I in the entry hall, which set the scene of the Truth and Reconciliation Commission of Peru (CVR) as well as its resulting report and photography exhibit titled “Yuyanapanaq-In Order to Remember” in 2003. The next two sections of the exhibit were intended to display some of the most representative memorial practices that developed in response to the CVR and invited the public to reflect on the limitations of such official endeavours. Both the establishment, represented by the military, and civil society, especially survivors’ organizations, felt compelled to perform and develop their own memorial initiatives in the aftermath of the CVR’s Report. 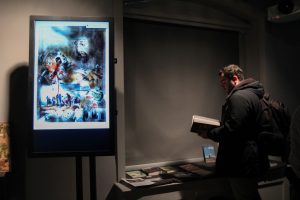 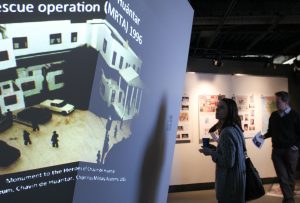 Section II corresponded to Milton’s first book, Art from a Fractured Past. Visitors were encouraged to explore the collection of artwork, photographs of civic actions, flyers, and posters from demonstrations that Milton brought back to Canada, transporting viewers to the streets of Lima. 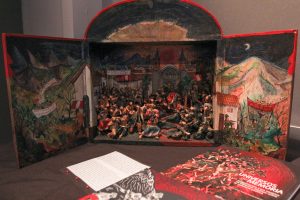 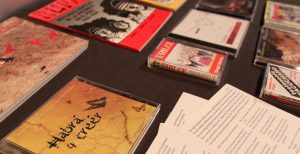 Section III, in CaPSL’s main room, portrayed military “memories” crafted in response to both the CVR’s Final Report and the human rights art and civic actions. In this space, the public could watch excerpts of a blockbuster movie developed by the military, and a patriotic video telling the story behind a “successful” military operation, as well as projections of a series of photos taken by Milton during her fieldwork in military memorial museums. As Kevin Gould, guest speaker from Concordia’s Department of Geography, Planning and Environment suggested, when encountering this type of material one might not only experience a certain discomfort but also feel, or at least identify, the anxieties and fears felt by the military in the face of the memorialization of Peru’s years of conflict, and its impact on the public image of the Armed Forces. 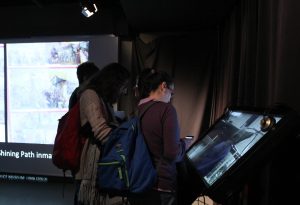 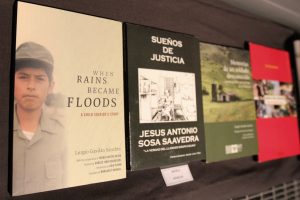 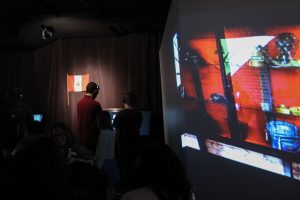 The heroic rhetoric of the visual imagery was complemented by an ensemble of publications produced by members of the military or individuals close to the Armed Forces. The ethical knots discussed by Shelley Butler were evident in the testimonials and personal memoirs displayed in this section. As Butler noted, Milton’s work invited both viewers and readers to reflect on the complexities of victimhood in countries struck by internal armed conflicts where social injustices and the horrors of warfare also affect the perpetrators of violence.

In addition to offering visitors a rich opportunity to encounter and engage with this subject in multi-sensory ways, and providing a space to discuss how public memory-making takes place, the “Visual Footnotes” exhibit provided access to an often neglected, but crucial element of research publications. Footnotes complement and support authors’ arguments. They can also reveal interesting facets of their investigative work. The “Visual Footnotes” exhibit was an inspiring strategy for displaying the richness of research methodologies and journeys. As CaPSL Director Erica Lehrer described her experience: “I feel like I’m standing inside the book!” 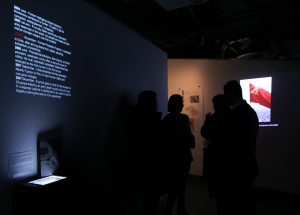 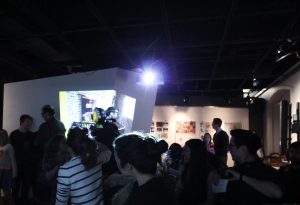 [1] During the 1980s -1990s, Peru endured an internal conflict between its Armed Forces and militants of Shining Path —a Marxist, Leninist and Maoist guerrilla—in which over 69,000 people were killed and disappeared; 35.6% of the violence was committed by state armed actors. During the 2000s Peru moved into a transitional justice regime from which emerged the Truth and Reconciliation Commission of 2003.