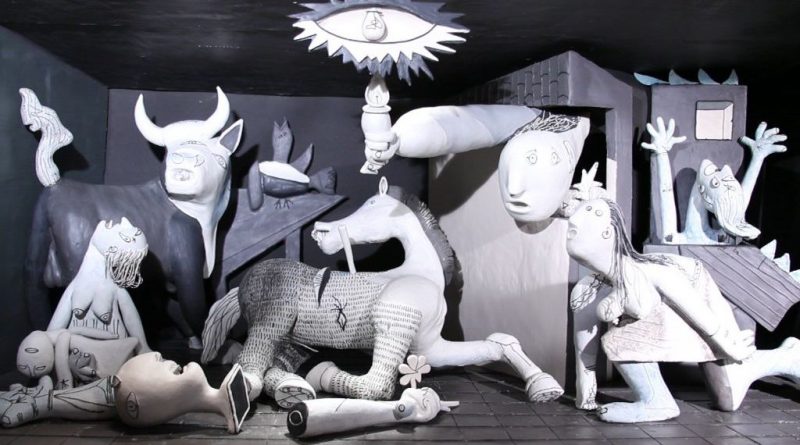 A woman walks across a room and picks up a crying baby. As she leaves the scene, the bombs begin to fall. This is the bombing of Guernica, the legacy of which is impossible to deny. This first targeted aerial bombing of civilians inspired Picasso to create his deeply anti-war masterpiece, “Guernica.”

In Víctimas de Guernica, Catalán director Ferrán Caum weaves together the imagery of “Guernica” and its profound denunciation of violence with the experience of the Salvadoran Civil War (1980-1992) and the country’s efforts to work toward peace. In his animated short film, Caum, who has lived in El Salvador since the 1990s, transplants molded plasticine figures from the Picasso work to scenes from El Salvador. Thus, the wailing Guernican woman with a dead child in her arms was carefully placed in the milpa, or cornfield. The scene is telling. When Salvadoran peasants fled from the military, they often found temporary refuge in nearby fields, as seen in the next scene. As in “Guernica,” many died.

The CaSPL lab was host to a screening of the film and a panel discussion about violence, memory, art, and reconciliation. Drs. Cynthia Milton (Université de Montréal) and Luis Sotelo Castro (Concordia University) joined Caum in an interdisciplinary exploration of these issues.

Milton, a Canada Research Chair in Latin American History, spoke about making art after a period of political, and often, state violence. Art, she argued, offers a way to more fully express and talk about the violent past. Yet, since it is not bound to truth, as a piece of evidence, art is undervalued.

Sotelo Castro, a Canada Research Chair in Oral History Performance, posed a series of questions to Caum, many drawing on the idea of a hyper-historian. Unlike the writer who only writes history, actors perform history; they “do” history to such an extent that they become hyper-historians.

Caum concluded by sharing a bit of what drove him to make the film and to tell the history of the Civil War differently. Rather than using more traditional documentary techniques that incorporate oral testimony with video and photos from the time, Caum used Play-Doh. The juxtaposition of the seeming innocence of plasticine and the violence it has been molded to relate pushes viewers to react.

In El Salvador, a country where forgetting dominates, the film pushes Salvadorans to remember. Caum hopes that this will contribute to the reconciliation the country so desperately needs.