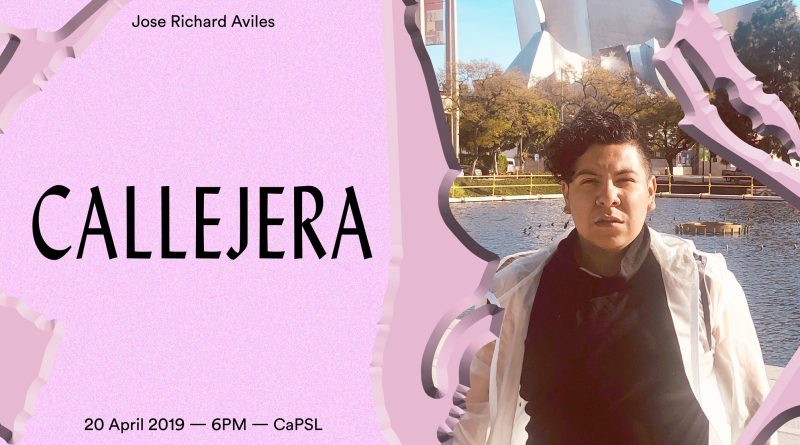 “not built, only implied, and usually invisible . . . useless, amoral and sensual space that lives only in and for experience.”

CALLEJERA is a multi-media performance piece that explores the testimony and spatial analysis of the Queer Ethical Subject. Historically, Queer folk, especially Queer folk of colour, have been othered and ostracized to edges. It is in those edges, under the pressures of heteronormativity, that queer people have had to self-determine and create what Betsky defines as the “architecture of self.” This piece looks at the author’s life and experience as a queer bus rider in the city of Los Angeles to create a piece of spoken word, dance, and film. Callejera, Spanish for Women of the street, is an homage to the Femmes that learned that the city was their first stage.

JOSE RICHARD AVILES is an emerging independent choreographer from Los Angeles. Aviles holds a BA in Dance from St. Olaf College in Minnesota. While at St. Olaf Aviles work focused primarily on using dance as a method of highlighting the stories of queer people of color. Aviles constantly seeks ways to find movements that are authentic to all of his identities and skins. His goal as a movement artist is to create works that inspire and empower others to become activists in their lives all while unpacking the epistemology of queer bodies and policing of desire. Such aspirations stem from his background in community organizing and passion for gender studies
As a current MSW and MPL candidate at the USC Suzanne Dworak-Peck School of Social Work and USC Sol Price School of Public Policy, Aviles is interested in working with LGBTQ youth populations, dance therapy, arts and social justice, and the role of community advocacy in the Development Process. Aviles has performed at Planet Queer, St. Agnes Church, and REDCAT Studio, University of Redlands, is 2018 TEDxUSC speaker, and is in the process of creating a new piece titled “Callejera: An Angelino’s Story” a dance-theater piece that explores queer urbanism in Los Angeles.

Concordia University is located on unceded Indigenous lands. The Kanien’kehá:ka Nation is recognized as the custodians of the lands and waters on which we gather today. Tiohtiá:ke/Montreal is historically known as a gathering place for many First Nations. Today, it is home to a diverse population of Indigenous and other peoples. We respect the continued connections with the past, present and future in our ongoing relationships with Indigenous and other peoples within the Montreal community.

The Curating and Public Scholarship Lab (CaPSL) is regrettably not wheelchair accessible. There is one small flight of stairs leading to the entrance of CaPSL but otherwise, the 6th floor of the Library building is accessible by elevator.